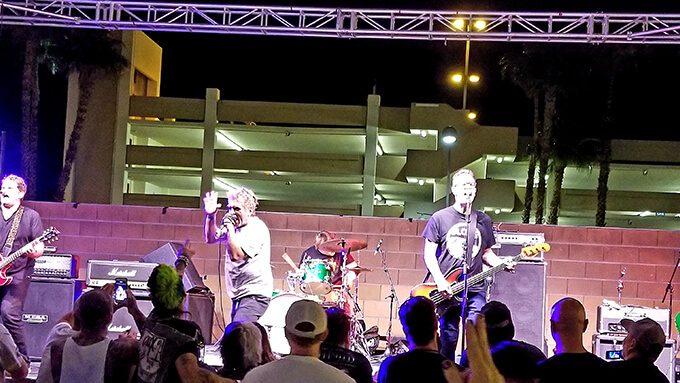 Since their inception in 1978, The Freeze have the distinction of being the first punk rock band from Cape Cod, which is the small off shoot of the state of Massachusetts that looks like a flexing arm if you are checking out a map. Formed by Clif Hanger (aka Clifton Croce), The Freeze has had a revolving cast of bandmates, including Hanger’s longtime songwriting collaborator, Bill Close, who’s incendiary guitar style punctuates the bands unique sound, The Freeze have carved out a respectable, if not legendary, 40-year career.

Initially, the band first received international attention in the punk rock world from being part of the This Is Boston, Not LA compilation in 1982. The Freeze provided the title track to the record which also featured fellow Boston area bands like The F.U.’s, Gang Green, The Proletariat, and Jerry’s Kids, among others. When the band played four of the seven tracks off of This Is Boston, Not LA at their 2018 Punk Rock Bowling appearance in Las Vegas, Nevada, from the crowd’s reaction, you would have never guessed the songs were over 36 years old.

With nine LPs under their belt and a handful of singles, The Freeze have continued to crank out one excellent record after another during their lengthy career. From the first single, “I Hate Tourists” which came out on Newbury Comics imprint, Modern Method Records, to their upcoming 40 Years of Defiance Volume 1 compilation coming out in the Fall of 2018 on Slope Records, The Freeze have continued to deliver great music combining Hanger’s biting yet thought provoking lyrics and Close’s intricate riffs that are both catchy and caustic. In addition to the upcoming retrospective of their storied career, Slope Records will also be releasing and album of all new material by the band in late 2018 or early 2019.

Hanger moved to Phoenix in the mid-2000s and Close now resides in Los Angeles, but the east coast attitude is still part of the band. Rhythm guitarist Zack Carmichael has been with the band for over a decade, drummer Aaron Hjalmarson for the last three, and newcomer, bassist Tom Reardon is a longtime veteran of the Phoenix scene and also the A&R Director for Slope Records. With a rock-solid lineup, new records to promote, and having recently signed to Slope, the future looks bright for The Freeze. Check them out when they come to your town in 2018, 2019, and beyond.