What Would Frank Discussion Do? 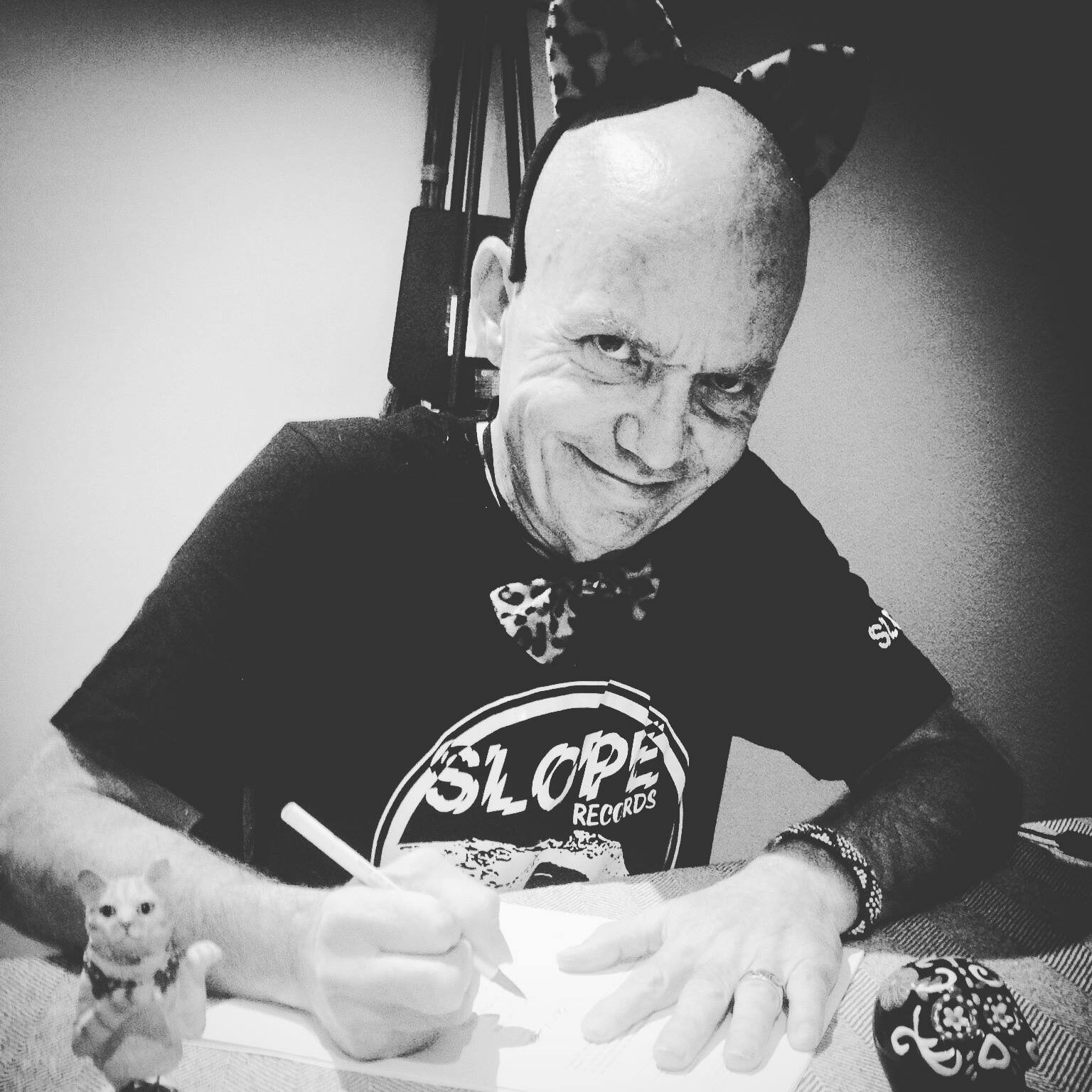 When Slope Records first started, the idea was to put out records by bands who needed to have music put out on vinyl, most of which were part of the Phoenix punk rock scene. While a label like Placebo had made a huge mark on Phoenix and put out some legendary (at least locally) records, we felt there was more work to be done and more history to be both honored and created here at home. One of the most enticing bands to potentially work with was the Feederz and to say that we here at Slope are fans of the band is an understatement.

The Feederz represented, at least in our then naïve eyes, all that was great about the early Phoenix punk rock scene. They were dangerous, humorous, and most importantly, flat out delivered the goods when it came to punk rock songs. Frank Discussion is a legend here in Phoenix to many people who were able to see and hear them “back in the day” and deservedly so. The guy seems to revel in fucking with things and people and when we got to know Frank a bit, we felt like we had found someone we could help and in return, could help bring some attention to Slope. It seemed like a no brainer at the time and honestly, in many ways, still does.

As the relationship grew, we were eager to support the endeavor of bringing new Feederz music to the world and began discussing just how to best do this with Frank and Clear Bob. Frank wanted DH Peligro to play drums, which we were stoked on, and we made arrangements to get Frank, Clear Bob, and DH in town to record four songs, two of which ended up on the EP, WWHD: What Would Hitler Do? which was recorded by Jeremy Parker and produced by Cris Kirkwood.

If you consider how much it is to fly Frank in from Florida and DH from LA (and the expense of paying DH up front for his appearance on the recording), put them both up in hotels (The Clarendon), and record for multiple days at Premier, put out 1000 copies on orange and black vinyl with artwork from Mike Fisher on the cover, it starts getting murky, at least on our end, how Slope Records has wronged the Feederz/Frank Discussion. This doesn’t even cover the expenses related to photoshoots, feeding the guys while they were here, and generally making their lives as easy as possible while making the recording.

Initially, we were pleased with the songs and multiple ads were put out, as well as sending copies to reviewers and radio stations around the country. The reviews were ok, at best, though, but there was still a great deal of interest on our part in putting out a proper, full-length LP which meant bringing everyone together for a longer time period again. Cris and Frank discussed possible times to make it all work while we thought things were a little rushed, we agreed to bring the band together, as well as give Frank a sizeable advance in order for him to be able to bring his family with him to be in Arizona during the rehearsal and recording process.

Again, we did this in good faith that the band would deliver a great album that would help not only revitalize them as a viable source of great punk rock and Arizona attitude, but also because we thought it would help Slope Records.

To be blunt, though. It hasn’t helped and only cost Slope Records well over $20,000 dollars to record around a dozen songs, many of which we did not think were good enough to put out. There was also a fair amount of drama that went down in the studio that resulted in an unfinished product, even after the sizeable investment that went into making the full-length in question.
Did communication break down between Slope Records and Frank Discussion? Absolutely. We accept and own our responsibility in that matter fully.

Did Frank reach out to us recently, though, before having an attorney send us a letter saying we were in breach of contract? No.

Did we have our attorney respond to the letter that Frank’s attorney sent? Hell yes.
Did we like having to do that? Hell no.

Frankly (no pun intended), we were shocked to get a letter from Stephen Wade Negben, PLLC on behalf of Frank Discussion terminating our agreement and demanding that any royalties (of which there are none considering how much was spent on making the records alone, never mind the generous advance paid to Frank Discussion and the appearance fees paid to DH Peligro) and all materials that had been provided by Frank Discussion being returned.

Once Frank went litigious, we had to get our attorney involved which, of course, added more expense to this now considerably regrettable experience. Recently, Frank Discussion has gone public, asking for funds to help with a legal defense that, to again be frank (this time pun fully fucking intended), he has no chance of winning.

What it basically boils down to is this: Feederz made a subpar record and even though we had invested a significant amount of money into it, there was not a huge reason to invest even more to put out the record on vinyl that was not going to be well received. Out of all the songs recorded, there were really only a couple that were any good and the best of them were on the 7” that hardly anybody bought. Sadly, this is a numbers game and while Slope Records doesn’t exist with idea in mind to make a bajillion dollars, it would be nice to even come close to breaking even.

It would also be nice if people (yes, we’re talking to you, Frank) appreciated all of the things a record label had done for them, even if not coming through on putting out a record that literally dozens of people might care about. It would be nice if people (again, you, Frank) considered how much time, effort, and resources were put into making sure you got some excellent treatment and were given a top notch opportunity to record some songs with your old friends. Who wouldn’t want that?

Even worse, who wouldn’t appreciate it and think, “You know what, maybe I should give these guys a call before I talk to an attorney and see if we can figure something out?”
Well, we are going to keep making records and be way more careful with who we do business with in the future.

Lawsuits! As Beautiful As A Rock In A Record Label’s Face!